As some of you may know…and most of you don’t yet, we at Fenix Flame Comics have been working hard to bring a new, fresh look at grading comic books. This has been released first for the iOs and followed by Android and soon Windows.

Basically speaking, the app asks you a series of about 25 questions (all multiple choice) and you literally get the grade of the book within a minute. Again, this grade doesn’t replace you having to submit to the third party grading companies, but with all our beta testing and trials and errors, we have come up with a system that is nearly spot on (99.8% accurate) with those companies. No more having to guess what you might get when you send a book in or even guessing if it’s worth sending in at all. With our app, you can actually know what your going to get.

Of course, we have to put a disclaimer in that this is purely for entertainment purposes only. We cannot guarantee the grade you get on the app is the exact grade you will receive from the other companies. But, as I mentioned, we have done so many trials and errors that we are comfortable saying you won’t be disappointed with the results of you using our app.

The app comes with 5 free grades so you can try it out and see what you think, get your feet wet and get an overall feel and comfort with how to use the app. After the 5 free grades is a measly $14.99 per year subscription to have the app. That’s right, only $15 a YEAR. That’s less than 29 cents a week. Couch cushion money!

The goal of this app is to be able to use it when you aren’t connected to the web. No wifi needed to grade. You can be in the middle of the convention and pull out your app and grade on the spot. I’ve been there when I wanted to review a book but I have no signal. Never again!

New versions of the app will also be rolling out as new ideas and enhancements are thought of. Version 2.0 was just released February 2020 and we already have new ideas we want to implement for version 2.1! Convention locators, recent eBay prices and recent sales of your book in your grade and other secret plans are already in the works.

We look forward to helping you achieve being able to have all your grades be spot on! 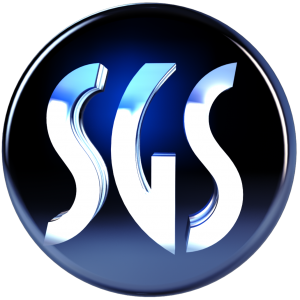 It’s getting amazing reviews and scores! 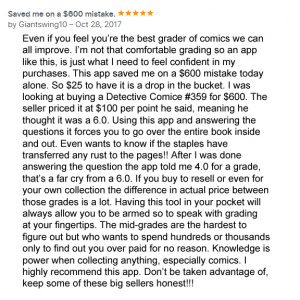